Home > Making Progress > Taking Running to the Next Level

Taking Running to the Next Level 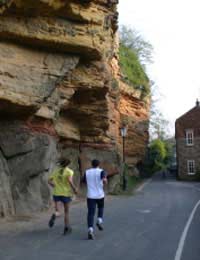 Many people come to running almost kicking and screaming, either because they feel they must lose some weight or their doctor has advised them exercise is essential for their long-term health.

Given this initial reluctance, it can come as a great surprise when, only a few months later, these same people can be overheard discussing recovery rates and different training methods over an iced smoothie in the bar of the health club.Once the running bug has bitten its victim, not only does maintaining a healthy exercise schedule become essential but the need to improve and test yourself over progressively longer and more difficult courses can be irresistible.

A Regime that Works

It should not be forgotten at this point that many runners do not feel this way, and are quite happy to have found a regime that works for them in terms of health benefits and consequent weight loss. These runners should not feel any pressure to attempt to take it to the next level. Personal choice is paramount.

However, should you feel your body has untapped running potential that you would like to explore, then it’s time to start thinking about specific workouts aimed at increasing efficiency and power in three specific areas: namely, speed, strength and endurance.

Speed becomes an issue when a runner is thinking about competing in organised events, for example a five- or 10-kilometre race when a burst of energy in the final minutes can be the difference between a top 10 finish or a disappointing place back in the pack. You won’t get faster by simply attempting to run your course faster, remember it’s about having the capacity to up the pace at a moment’s notice often over a relatively short distance.

Think about your normal course and incorporate four 400 metre segments (you don’t have to be too specific here) situated at regular intervals into it, for example by using landmarks as the beginning and end of each segment, or even using a stopwatch to time a two-minute interval. Take the first half mile at normal pace and when you’re ready rapidly increase your pace for the first of the four segments. Then slow down to normal pace, repeating this three more times during the course of the run. This regime can be adapted to include more speed segments as training progresses, or supplemented by work on the treadmill, speeding up and slowing down the machine at regular intervals. It is worth seeking the advice of one of the gym’s instructors, who may be able to fine tune your efforts to achieve greater results.

The gym instructor can also help in terms of a programme of weights for building both upper and lower body strength, which will not only increase power in the calves and thighs but also the muscles surrounding the knee, providing them with greater support. Similarly the shoulders and upper arms will benefit both in terms of strength and efficiency, and all weight training should be supplemented by a cardiovascular workout in a swimming pool to provide the heart and lungs with a challenge.Endurance is all about how you finish a race – you don’t want to be ailing in the final half mile or so, either physically or mentally. As a first step, begin planning an additional section to your course to up the mileage. Then, working on the same principle as the speed training, divide the course into three segments.

During the course of each run, choose a particular segment and up the pace for the duration of it. Alternate the point in the run when this increase in pace occurs, so that one day it will be the middle segment, the next day the latter, and so on. However, the first segment should always be followed at normal pace so that your body is physically and mentally settled into the run before additional demands are made of it. Keep a log of how you felt and performed during this segment training, perhaps even record your times on a stopwatch. Your aim, in common with the areas of speed and strength, will be to make steady but discernible progress.