Home > Where to Run > Guided Tours for Joggers 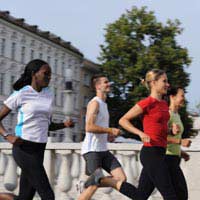 Hoping to fit in a short city break around your busy schedule but afraid it won’t leave you enough time to see all the sights? Well, how about checking out whether the tourist information site has a listing for a jogging tour. You’ll see all the famous places, and a great deal quicker than attempting the same itinerary on foot or on a bus. There’ll be no guilt about missing out on your running while you are away, either, leaving the opportunity to indulge in a long lunch or two, or even dessert after dinner.

Understandably you will want to know what is involved, the distance you will be covering and what you’ll need to take before signing up. As a guide, tours of London – Google for the specifics and prices – offer scheduled packages as well as the chance to customise, and cater for a range of abilities, from those new to running who will appreciate a gentler pace, up to serious exponents of the sport in training for a 26-miler. A range of themes are also offered, from some of the capital’s most famous sights such as Big Ben and Buckingham Palace to an exploration of its long and close relationship with the sea.

San Diego and Los Angeles are two West Coast cities that offer similar deals – you never know who you’re going to pass on their morning jog in LA, so it might be an idea to pack your autograph book in case you find yourself taking a water-break close to one of the city’s glamorous residents.

Back in Europe, Edinburgh, Berlin and Copenhagen are examples of other capital cities that cater for visitors who prefer to explore under their own steam rather than adding to that scourge of the 21st century urban conurbation – the motor car.

Every major city is aware of the need to tackle pollution and traffic congestion, so offering an agenda to visitors that includes jogging tours not only reinforces the council’s green credentials but makes a contribution, albeit small at the present time, to cutting down on the number of sightseeing buses that can leave local drivers more than a little hot under the collar.

Your travel companions may not fancy getting hot under the collar, either, by running from place to place on the jogging tour. Rather than join you, they may tease about how they are going to relax on a double-decker and let the engine take the strain as they explore a new city. Unfortunately, they may not be laughing so much when their tour gets stuck in lunchtime traffic. By the time they return the worse for wear from seeing the sights at a snail’s pace, you will have been back at your hotel, showered, refreshed and ready for some well deserved rest and recreation.

Runners sometimes complain of the mental fatigue of following the same set of routes during their schedule. Well, a change of scene doesn’t come much better than seeing some of the world’s most iconic landmarks. So when you next pack your bags, ensure your sports shoes join the passport and toothbrush on your list of essential items.