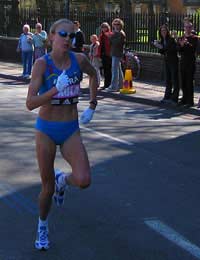 The 2011 London marathon will represent a significant milestone for the event, the first race having been run through the streets of the British capital 30 years previously. Across the Atlantic, the New York version boasts a decade of additional history, but both of these ‘world city’ challenges have a long way to go to clock up the mileage completed by Boston since the first entrants came under starter’s orders in the Massachusetts city in 1897.

All three rank among the big hitters of the global phenomenon that the city marathon has become. But beyond the names of the famous runners who have competed, the eye in the sky and street-level camera angles that are part and parcel of the comprehensive media coverage, and the omnipresent sponsors’ logos and messages, what has really made these races the major dates in the sporting calendar they now represent is the presence of the humble amateur and club runner. Without these relatively unsung heroes, the impressive scenes of long lines of humanity snaking past iconic landmarks would be absent, and it is fair to say the true spirit of the event would be absent, too.

These events are a fanfare for the common man, a celebration of the true nature of sport in a way the big football matches, golf tournaments and tennis finals can never be; even down to the fact that there doesn’t have to be a winner, because everyone who takes part – not just the elite battling it out for the title - is a winner. They may not cross the finish line first, or record the fastest ever time – a great many do not even get to the finish - but that is not how success is measured.

Rather to be a winner is to simply have the determination to complete the training and have the guts to even contemplate taking on 26 miles, a distance that does not just test the mettle of a runner physically but also mentally because when the limbs begin protesting around the 10-mile mark it is the stamina in the mind that can be the difference between collapsing by the road-side and battling on through the pain.

In turn these global events have spurned a myriad of welcome imitations in the shape of half-marathons, 10ks, even those Santa Dashes that brighten up an early Sunday morning in many town centres in December. A great many such events are designed to fund-raise for deserving causes and have thus functioned as a means to help the disadvantaged while spreading the word that a fitness regime can be fun and inclusive.

These races reclaim the streets for the citizens of individual cities in a way no other event could, and rightly place running as the true people’s sport.