Home > Case Studies > How I Ran My First Marathon: A Case Study 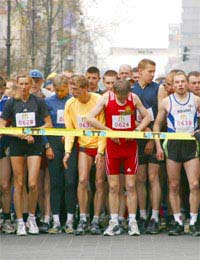 Inspired by watching Paula Radcliffe break the world record to win the London Marathon in 2003, Catherine Rutherford decided she would take part in the race before she turned 40. It turned out to be one of the toughest challenges of her life, but one that gave her an incredible sense of achievement.

“Paula was amazing that day,” said Catherine, a Yorkshire mother-of-three. “I sat at home and watched the whole race on television and remember being in awe of all these people who made it across the finishing line. It’s such an amazing feat and tens of thousands of people – everyday people not too dissimilar to me – ran the whole 26 miles.”

“I decided there and then that I wanted to give it a go, but I had no experience of running whatsoever. Apart from the housework, the only exercise I got was going to the local swimming pool with the children at the weekend.”

Read All About It

“In all honesty, I didn’t know the first thing about running a marathon, so I decided to read as much as I could on the subject. There was so much to take in and I knew straight away that I had taken on a great deal of work.”

“I did everything by the book. My diet improved and I warmed up before runs and cooled down after them. I even went through several different pairs of running shoes and sports bras before finding ones that I was happy with. At first, the distances I covered were fairly modest – just one or two miles – but I lost a fair bit of weight quite quickly and felt fitter. I kept running shorter distances during the week, mainly because it was all I had time for, but introduced a longer run at the weekend and gradually increased the distance.”

“It was really tough, no question about it, but I felt better the more running I did and got a real sense of achievement even after a training run. I started to take part in some competitive races, although I was extremely nervous at first. After a few five-kilometre races I really got a taste for it and then I stepped up to 10K races and half-marathons.”

“I had got it into my head that the London Marathon was the real deal for me and I wanted that one to be my first marathon. I didn’t enter in 2004, because I was sure I wouldn’t be ready for it. When I was ready - and I felt I was as ready as I’d ever be by 2005 – I entered the London Marathon but didn’t get in. It was the same case in 2006 and I started to worry that I wouldn’t be able to take part before I turned 40, which had been my original target.”

“In 2007, I decided to run for a charity who would guarantee me a place as long as I raised a certain amount of money. Obviously it was great to be able to raise funds for a good cause, but it did mean my time – already stretched by family and running commitments – was at even more of a premium.”

“Because it had taken me so long to get a place in the London Marathon, I felt I was quite an experienced runner when I made it to the start line. I had never done the marathon distance, however, and the nerves kicked in early. As a result I wasn’t able to eat as much of the precious carbohydrates as I wanted to the night before the race. I was too nervous to eat and I paid for that the next day.”

“Once the race was under way, I was able to run the nerves out of my system, but I’d never covered 26 miles before – even in training – and it is a psychological barrier as well as a physical one. I started to struggle very badly about seven miles short of the finish and for a long while I was sure I wasn’t going to make it. Somehow, I managed to keep going and all I remember when I got to the finish was an overwhelming sense of relief.”

“It is, without doubt, one of the most difficult tasks I have ever undertaken, but looking back on it now gives me a great sense of achievement. I do still run and take part in shorter races, but have yet to decide whether or not I will attempt another marathon. I’ve done it once, though, and no-one can take that away from me.”