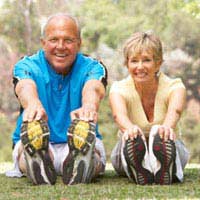 One of the bonuses of establishing a running routine is that it can inspire other members of the family to improve their all-round fitness and enjoy the physical and emotional benefits of exercise. In the case of one husband and wife team, it was the woman’s success in shifting the pounds while pounding the streets that led her husband to decide the time was right for His ’n’ Hers running shoes by the front-door mat.

Contrary to what men would have everyone believe, they are very self conscious about their weight and appearance, so when the husband in question decided to start running, it was not surprising that he turned to his partner to provide what might be called safety in numbers. “Yes, I was aware I needed to shift the pounds, but there was no way I was going to run round in a pair of shorts and a T shirt on my own. Maybe no-one would have been looking, but I thought they would have a right laugh at me struggling down the street,” he says.

So the lady of the house was designated running buddy for hubby, a role she admits she wasn’t unhappy about initially because it meant her partner’s waist might regain some definition in the process. Unfortunately, it wasn’t long before the problems started, she says. “I think he tried to go too far, and too fast, too quickly, despite the fact I advised him it was all about taking things slowly to begin with. Of course, he got tired, his leg muscles ached – and I don’t think he appreciated the fact I was in my comfort zone while he was bright purple and puffing 10 to the dozen. He was a little angry about it all, and two weeks into our running he gave up.”

Sadly, the idea of marital bliss on the move seldom becomes reality. For a start, one partner is likely to be further along in their running plan than the other; if not, it may be that they are more committed and run more regularly. This immediately puts the other half at a disadvantage, and pleas to “slow down” and, it has to be said in some cases, “stop laughing”, only serve as the starting point for arguments that can continue after a session is over.

The relative familiarity of the running partners to each other compared to, say, a fitness coach or friend or neighbour, means there is little or no barrier to holding their tongue when they do get hot under the collar.

When such a deterioration in relations does occur, it is important to curtail the running partnership right there and then, and discuss alternative ways for each partner to carry on running either solo or with an alternative “mate”.

Thankfully the couple in question did just that. According to the wife: “Arguments that started during running, sometimes ones that were not running related, you know domestic stuff, bills, family issues, tended to carry on when we got home, or were brought up again later. I’m sure some couples get on splendidly when exercising, but we didn’t. We had a chat, and decided I would carry on as before – I was quite happy running solo and setting my own goals – and my husband would get a trainer. He’s doing very well now, so we are both happy.”

It is worth noting that some couples do, indeed, get on “splendidly” when running, but if there are any doubts on the part of either partner that clocking up the miles is unlikely to prove a marriage made in heaven, it is worth going your separate ways for the duration of exercise time. After all, absence does make the heart grow fonder.