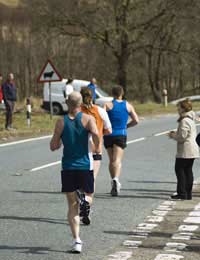 Computers at work, big-screen TVs at home: no wonder doctors are constantly bemoaning modern society’s sedentary existence and the consequences for the long-term health of millions of individuals. Indeed, never has there been a time when the old put-down “you should get out more” was so succinct. And what better way to get out than in a pair of running shoes, around the city streets or parkland tracks?

Oh, but why, so many people wonder. Who really wants to set themselves up for ridicule, wobbling along the pavement, getting hot and bothered - and for what? Losing a few extra pounds? Squeezing into last year’s must-have jeans or sports shirt?

The fact is that too many simply see running as a way to lose weight for the sake of vanity. But it is so much more than that. Forget about appearances, the benefits of losing inches across the waist and hips can have a much more profound effect on overall health. For example, it can help to lower blood pressure – a safeguard against heart disease and stroke - and prevent the development of diabetes.

Perform to the Maximum

What about the cardiovascular system? Denied the ability to perform to the maximum for too long, the heart and lungs will jump at the chance of proving their efficiency during the course of a two- or three-mile run. And not only will the exercise improve their efficiency, but your organs will be eager to show they can perform even better given the opportunity. Good posture during running will also allow the core muscles of the abdomen and lower back to find realignment, strengthen and tone up.

Once an individual gets moving again, it is surprising how quickly they embrace this new facet of their life because they begin to realise that rather than being physically on the scrapheap, they can still cut it when they want to. This, in turn, will only spur them on to up the pace and the mileage, and make running an integral part of their weekly routine. Yes, this new regime will help them to shed that fat suit they’ve been sporting for far too long, but the inner benefits will be far greater.

A Feeling of Well-Being

However, running is not just about physical fitness. There’s the mental side, too, and not just because you feel better about losing a stone or two. Going for a run helps an individual escape their environment, either professional or domestic. There are no televisions, telephones, computers, work colleagues or family members. This gives them the chance to, perhaps, think over a problem or two, or simply reflect on recent events.

The endorphins that will be released will help bring a feeling of well-being that will make the world a better place and everyday issues less problematic. In short, running will promote positivity.

Whatever an individual’s reason for taking to the road, a well designed programme will bring both physical and mental benefits. It can promote a new found feeling of confidence, of regaining control of life. The person they left behind on the couch, tucking into a TV dinner and exercising nothing more than their index finger on the remote control, will be a distant memory.