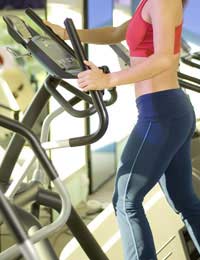 The changing rooms at the health club can be an intimidating place for those not up to speed with gymspeak. The majority just want to get on with shedding a few hundred calories, along with the odd inch off the waist, and retire to the bar for a well earned smoothie.

The minority? Well, they’re more concerned with letting everyone within earshot know that when it comes to fitness, well they’d give most people within British Athletics a run for their money when it comes to spilling out fitness jargon.

In recent years, many of these misguided creatures have been given to bouts of shouting “ellipticals” above the general dressing-room din in a bid, they believe, to gain some credibility. Of course, the majority of those on the receiving end of these lectures will just nod sagely, in the hope no-one actually challenges them as to what an elliptical is. Sound familiar?

A Useful Tool for the Regular Runner

Well, mere mortals – ie the majority - will be glad to know that the term is generally used to describe a cross-trainer. These machines have become a feature in most gyms, and are very popular because they work both the upper- and lower-body without inflicting on the body the level of impact it would receive, for example, from running on the road. For this reason alone, they can be a useful tool for the regular runner, who may otherwise be leaving themselves open to overuse injuries of the calf and knee.

That’s not to say that running outdoors – one of the invigorating bonuses of taking up this type of fitness regime – should be abandoned. Simply that striking a balance between indoor and outdoor sessions can be beneficial.

Away from the issue of impact upon the joints and muscles, which can after all be addressed by simply using the treadmill, the cross-trainer can prove useful also in terms of improving running technique. Take a look next time you are out on the road or in the park, and count how many fellow runners you pass whose motion is impaired because their upper- and lower-body is not working in tandem, whose shoulders and neck are twisted into a tight position that will not promote anything more than a headache and muscular pain.

In order to interact with a cross-training machine efficiently, the individual has to be well balanced, and be able to use both the foot plates and handles in synch. This development of good technique means the head will be upright and the shoulders will be relaxed, the chest out, and the core muscles of the abdomen nicely supporting the entire upper body.

Below the waist, a smooth stepping motion will provide the foundations for the entire interaction between man, or woman, and machine. You should experience knees, hips and shoulders moving smoothly as one. As you lose the initial fear of falling off the machine – almost everyone experiences that! – you will relax and the understandable urge to look down at your feet will disappear.

The trick is to translate the posture and smooth action adopted on the machine to when you are running outdoors. This is not as difficult as it sounds – the support the machine offers you means that you begin to think about the running action as a whole, rather than simply arms and legs pumping independently of each other.

The smoother action promoted by the machine will make your running easier and, as a consequence, more enjoyable. And because you are running with more efficiency and better balance, the chances of picking up an injury are lessened.

So forget about the snobbery of runners who believe machines are for lightweights, and more importantly forget about the gym bores. Look upon the elliptical as a useful training and fitness tool, rather than a piece of jargon that will gain you entry to the in-crowd down at the health club.

Skip Your Way to Fitness