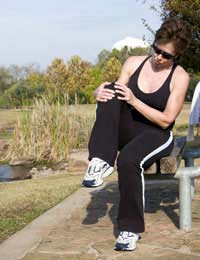 Neoprene knee supports, some of which appear more suited to a Nasa-space programme than a jog around the block, have become something of a badge of courage in the running community. For some, they are evidence enough that here is a serious athlete, one that is prepared to put his body on the line to keep with the schedule and scale the heights towards peak performance.

Courageous these individuals may be, but increasingly common occurrences of runner’s knee are not simply a case of individuals pushing themselves to the limit; rather, they simply point to the kneecap suffering the consequences of poor alignment and a lack of support from the muscles around it.

Look at the large muscles above the kneecap at the front of the thigh. These are the quadriceps. While your thighs may indeed be pounding as you clock up the miles, it is the rear part of the upper limb that is doing the majority of the work and, therefore, developing. As a result, the area to the front will need some extra work via some resistance work. Think about approaching one of the trainers at the local gym and ask them to draw up a regime that will target quadriceps development.

While you’re at, ask the trainer to take a look at your running posture, because this, too, may be contributing to any pain you may be feeling in your knee. Are you, for example, well balanced, distributing the weight across either side of the body with each step or are you tending to put too much weight on one leg? This problem can be the result of an everyday task such as carrying your workbag on one particular shoulder. There should also be some focus on how your feet are landing on the running surface, too. If they’re hitting the ground at the wrong angle, this will be putting an abnormal amount of stress on either the inside or the outside of the knee.

Ideally, you want to be building the knee and checking out your posture before pain strikes. If you haven’t, make sure you do as soon as the first twinges make themselves known. Do not soldier on, hoping to “run it off” because you won’t; you will only succeed in making things worse.

As well as addressing the technical aspects of runner’s knee prevention, ensure that any pain in the area is referred to a GP and a physiotherapist. They will be able to advise on icing techniques and suitable anti-inflammatories, depending on the severity of the problem, as well as the right approach to helping the knee recover and beginning to run again. Always listen to professional advice, either of the technical or medical variety, and never attempt to rush back on the road as you may end up causing further damage.

It’s all too easy when you begin running to forget that, however much your kit and shoes cost, your body is the most important piece of equipment that you own. You certainly can’t nip out to the local sports shop when it wears out, so treat it with care and respect and it will give you the result that you are aiming for.

The Truth About Running and Fertility

How To Treat & Prevent Shin Splints

Where to Find Advice and Help for Running Injuries

Listen to Your Body