Don't Be Too Ambitious 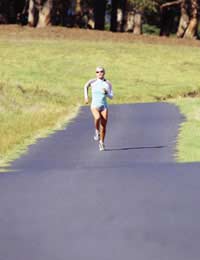 Too much, too soon will leave those new to running nursing an injury. So while there is no greater feeling than the first time you pick up some speed either on the road or the treadmill, do not take it as a cue to set yourself progressively more difficult targets that will simply be unattainable given the baseline physical condition that you started from.

Rather, sit down and decide where you want to be in three months’ time: perhaps on the starting line of your first race? You definitely don’t want to be sitting glumly in the physio’s surgery.

Now that you’ve decided, it’s not a good idea to put too much stress on your limbs; it’s time to plan your progress. For example, now that you’ve passed the walking or walk/run stage and have graduated to running your course from start to finish, think about consolidating for a month and getting into the physical and mental routine required to successfully complete each run. This means aiming to run not more than three times a week and for no longer than 30 minutes.

‘But I’m enjoying it so much, I want to run every day,’ I hear you cry. Nice in theory, way off base in practice. In order to be in the required condition to run effectively, the body needs rest. You don’t have to incur an injury to suffer some aches and discomfort. Very often they are simply the result of the body having worked hard. And there’s certainly nothing wrong with that. After a day or two, the aches will have melted away, which means you are free to run again. Of course, if they don’t, injury may well be a possibility and it would be best to seek some advice before slipping on the shoes again.

Once you feel comfortable with your routine, then it is time to think about adding a little more intensity. At first, this should not entail increasing the number of times a week that you run; rather, add some distance or gradient by changing your route. If you are restricting your running to the gym, perhaps introduce some incline, or add five or 10 minutes to the time on the treadmill. Once you are happy with your performance, there will be scope to up the number of weekly runs from three to four.

What you want to avoid at all costs is having to retreat to your previous level of training because you became too ambitious, introduced too much gradient or distance too soon and found that you just couldn’t cope. Remember, gradual improvement is the key; impatience will only result in you effectively going backwards.

Try to supplement your running with some other forms of exercise, such as swimming. This will add variety to your fitness programme which, in turn, will help alleviate any possible feelings of frustration that progress is not happening as fast as you would like. In fact progress is being made; it’s just that it might not be as obvious to you. But for those around you, the benefits of making slow, steady progress will be all too evident.