Home > Nutrition for Running > Drawing up an Eating Plan 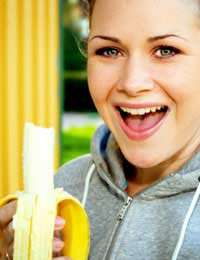 There is no great secret to learning the correct way to eat when you begin running. In fact, in many respects you should continue with your regular diet. That is, assuming that you have been eating the right foods in the first place.

Not that there isn’t a place for the occasional indulgence such as dessert in a restaurant or the odd glass of wine, but exercise and doing it effectively is as much about what you put into your body as how far or how fast you run.

So the right foods: plenty of carbohydrates to provide you with the energy, and plenty of protein, too. Where the secret of eating correctly for runners comes into play is when to eat both before and after a run.

In terms of a weekly plan, look at the times of the day when you will be running and work around them with the menu. First of all, breakfast. If you run early in the morning, either because it is quiet or because it is the most convenient time in the working day, take some fluids and a piece of fruit such as a banana around 45 minutes before setting off because the energy afforded by the snack will make the session more satisfying and effective. When you return, remember to replenish your carbohydrate stock, perhaps with some bread or toast before beginning the daily routine.

A light lunch, supplemented by some fruit and water, is an ideal way to ensure that your appetite is satisfied. Do not be tempted to skip any meal time because, one, it is healthy to eat and, two, hunger pangs almost inevitably end in snacking, usually on the wrong types of food. However, snacks are not bad in themselves; in fact, they are to be positively encouraged, but they should be included as part of a regime that includes three meals a day.

The evening meal should be taken as early as possible, because the body requires time to digest, and heading off to bed less than an hour after eating will both impair digestion and the chances of getting a good night’s sleep. Both red and white meat have their part to play but ensure they are trimmed of fat and grilled rather than fried.

If possible keep the same exercise and eating routine at the weekend as the rest of the week because it allows the body to settle into a rhythm that will benefit both general health and running development.

It is useful to keep your eating plan in place on a wall at home or at your desk for the first few weeks so that you become accustomed to the routine and don’t, for example, forget the afternoon snack of juice and a piece of fruit. But after a while it will become second nature. And the positive results will ensure you don’t take your eye off the prize and slip into those old bad habits, otherwise the benefits that are all too apparent will begin to slip away as quickly as they appeared.

The Importance of Hydration for Running