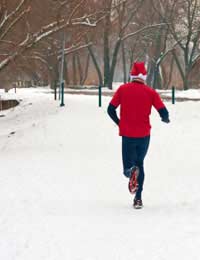 The manner in which some runners talk about Christmas conjures up images of them sitting in the corner scowling, a veritable Mr or Mrs Grump, shaking their heads at the excess of it all. No doubt they probably wear their running shoes as protection, a latter-day crucifix designed to ward off the evil spirits, as well as the wine, beer and varied forms of confectionery that are passed around by their friends and family. And when it comes to the party games, well it’s a case of making their excuses and popping out for a quick two-miler to relieve the stresses and strains of the day.

Of course, there is no need to display an air of superiority. Fellow revellers may not share your determination to maintain good fitness levels but that doesn’t mean you can’t lighten up. It doesn’t mean your Christmas Day meal plate must contain the same carbs/protein split that you eat the rest of the year. In other words, just chill a little. So there’s a large portion of turkey on your plate? Well, it’s low in fat, and a good source of protein. And be sure to help yourself to those verdant sprouts – they’re full of nutrients.

In other words, over-indulgence isn’t simply about eating too much, or drinking too much - it’s also about over-indulging your own love of the sport, and frankly it can get a bit tiresome. Your family will have supported your efforts throughout the year, foregoing time spent together to allow you to train. So when Christmas comes around, there is no harm in taking things a little easier for a few days; perhaps missing one or two sessions to allow for extra time around the TV, visiting friends, or taking a bracing walk together.

The odd glass of wine, or sweet sherry, depending on your preferences, is not going to put you back several months in terms of schedule. The same applies to some Christmas pud or a slice of Stilton. The key is moderation. And don’t be tempted to run to the bathroom scales every time you can’t help occasionally dipping your hand into the sweet bowl. Once you’re back on the move after Christmas, any excess fat that has attached itself to your abs or hips during the festivities will quickly disappear into the cold January air.

Having said that, a few stern words on alcohol consumption are called for: runners are all too aware of the damage it does in terms of dehydration and inhibiting the ability to get a good night’s sleep, so it is important during the party season to ensure you take on plenty of water both during and after drinking, and don’t contemplate going for a run the morning after the night before. Your body will recover from this indulgence, but it needs time to do so.

While it is important for runners to be sensible in terms of what they eat and drink at Christmas, this doesn’t mean they have to forgo all the pleasures of the season. There’s nothing wrong with the odd indulgence after a good year’s work on the road, and the promise of another to come. So put a smile on your face, kick off the running shoes for a couple of days and sit back and watch Santa struggling to cope with the only exercise he gets all year.

The Importance of Hydration for Running