Home > Running Technique > Is Barefoot Running Really Better for You? 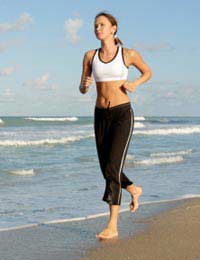 When a report emerges from a world-famous university like Harvard and is given the legitimacy of a place between the covers of the scientific journal Nature, it is going to get people’s attention. When the report in question extols the virtues of running barefoot, well that’s going to get the media’s attention, not least because of the potential ramifications for the global sportswear industry that ticks over rather nicely year-on-year from sales of shoes.

The truth is that while the efforts of Professor Daniel E Lieberman and postdoctoral researcher Madhusudhan Venkadesan, the co-authors of the paper, sparked plenty of interesting debate, there are unlikely to be too many executives from the likes of Nike and Adidas queuing up to throw themselves under a subway train anytime soon.

Let’s get real: the majority of runners are likely to stick with what they know and opt for shoes. The integrity of the surface they are running on is the biggest factor here. The simple reality is that the urban environment that many have to negotiate during their regular route holds many perils for unprotected feet. So if it is a choice of heading down to the local sports shop to purchase a new pair of trainers, or sitting around in casualty waiting for a nurse to remove pieces of glass or other foreign bodies from the soles of the feet – well, as the marketing men would say, it is a bit of a no-brainer.

To be fair the purpose of the investigation was never to doubt the effectiveness of commercially available sports shoes but rather to provide an insight into the mechanics of a physical action that we all take for granted – namely, putting one foot in front of the other. Using runners from both the US and Kenya, the scientists found that the majority of those wearing shoes landed on their heels when in stride, while those in bare feet used the middle or front of the foot to cushion their landing. They hope that their research will provide a stepping stone towards improved methods of diagnosing and treating sports related injuries.

For those runners who fancy a quick turn as a human guinea-pig, these observations can be replicated by taking your shoes and socks off next time you are in the park and finding a stretch of grass on which to practice on, checking first of course that there are no potentially painful objects in your path. After a number of circuits you will find that the way your feet fall changes as your body adjusts to lack of support from the shoes, thereby placing less weight on the heel.

However the professor has a warning for those tempted to rush into embracing the new-found freedom of wearing no shoes: this different technique of landing requires an individual to build up the muscles in the calves and feet required to safely adjust from being a "heel-striker".

Runners may not be ready anytime soon to lose their shoes, but the Harvard paper offers them a valuable insight into the intricate mechanism that allows them to perform the sport they love, and why that mechanism should never be taken for granted.