Home > Running Technique > Can Running Spice Up Your Love Life? 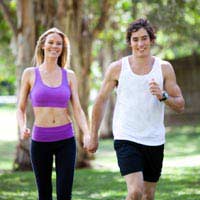 The rigours of an intensive exercise session mean that it would not be too unkind to suggest that the vast majority of runners hardly look their best when they are out and about. There’s the flushed face, hair matted by perspiration and that look of intense concentration that says, ‘I mean business, here’, or in the case of some, ‘I don’t think I’ll have the strength to open the front door’.

No, when it comes to listing the world’s sexiest sports, the humble pursuit of running excellence is unlikely to push its way anywhere near the front – leave that to the footballers, tennis players and gymnasts. But wouldn’t you know it, just as runners have accepted their place as one of the ugly ducklings of track and field, up pops a survey that says they are fast becoming some of the biggest flirts on the planet. Not only that, but the sport is a great way of finding true romance.

The UK-based health and social care charity Sue Ryder Care is the source of these amorous suggestions, having undertaken the research in response to the great many runners who have taken time out of their schedules to raise money for the charity. This, says Sue Ryder Care, led them to attempt to discover why the sport is so popular.

The answer that came back, essentially, was that the sport represented a tremendous opportunity for people to make new friends while enjoying an invigorating workout. The report also came up with an interesting name for this new breed of runner - a flunner.

Not surprisingly a spokeswoman for the charity expressed the hope that the new-found opportunities to find love while pounding the streets would have a positive impact on its ability to raise funds by attracting more volunteers willing to participate in organised events, presumably in the hope of finding Mister or Ms Right while helping others less fortunate.

A Runner Who Flirts

But wait one minute. Let’s row back a bit here. Flunners? What in the world is one of those? Well apparently a flunner is a runner who flirts. There may be many runners who will find it hard to remember the last time they encountered such an individual. It certainly brings a whole new meaning to the phrase, the thrill of the chase.

However as the charity’s survey correctly identified, events and running clubs are a great way for people to broaden their social horizon. They are also useful in terms of testing an individual’s ability against their peers; and if love blossoms in such a competitive environment, well so much the better – everyone’s a winner.

So there you have it, the age of the flunner is upon us. If anyone remarks that a certain footballer at the World Cup is rather fetching, or Wimbledon is attracting more than its fair share of beautiful people on court this year, advise them that if they want to see real sex appeal, they only have to look out of their bedroom window at the procession of morning joggers. Perhaps a purple face, pumping arms and matted hair are an underrated look after all.