Home > Where to Run > Cross Country and Trail Running 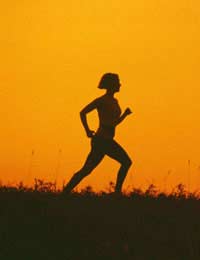 One of the mental barriers that prospective runners have to overcome is the schooldays memory of cross-country. Of feet reluctantly been dragged around the fields, driven on by the relentless barking of the PE teacher. So despised was it by many, that the prospects of a maths lesson seemed positively idyllic.

Fast forward 20 or 30, even 40 years, and cross-country conjures up very different images. Of dancing over puddles and mud patches, and running up grassy knolls and around leafy parkland. For those used to pounding the streets in a bid to get fit, it is the thought of cross-country that now sounds idyllic.

Along with trail running, the rules and organisation of cross-country are usually the responsibility of a national association, in the case of Britain and Northern Ireland, UK Athletics. In common with other running disciplines, there are various levels in terms of competition from enthusiastic amateurs to both national and international meetings that are open to the very best.

Competitors can expect a varied and testing course, comprising of both flat and hill stretches, and both endurance and speed in the final straight mean every facet of running ability is put to the test. Softer ground underfoot means that ankles and knees will take less of a battering but the very nature of the course means that overnight rain can make the going a lot more difficult than would otherwise be the case. For some runners, slip-sliding through mud means more fun; for the more serious, it can mean valuable seconds or minutes added to their time. To prevent any temper tantrums, many races tend to be staggered, allowing the better competitors to set off before the rest of the field.

The Trail Running Association is affiliated to UK Athletics and offers more information on the sport for British runners. Its equivalent in the United States is the American Trail Running Association. Like cross-country, trail runners do not have the relative comforts of a consistent and sound surface afforded to those on the road. Indeed the challenge can be more daunting, with streams to cross and rocky pathways to contend with. But the bonus can be breathtaking countryside and air that does not suffer from the pollution of passing traffic.

Like cross-country, trail running events involve a variety of distances, but given the nature of the sport, organisers may have the added headache of securing the permission of landowners before a designated course can be confirmed. Also, there is the problem that comes with sending people off around a countryside route that they may not be familiar with, so compasses and even whistles for attracting attention may be as useful as an adequate supply of water.

In terms of equipment, trail running shoes differ from those designed for the road, the uppers made of a tougher water-proof material and the soles reinforced to protect the feet from sharp stones.

For those wishing to broaden their horizons, taking to the trail is a great way to get more out of your running - international events offer some awe-inspiring scenery. Even those who limit themselves to cross-country find it freshens up their running and provides them exhilarating experiences a world away from the former comforts of the armchair and the TV remote control.