Be an Environmentally Friendly Runner 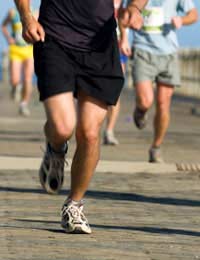 Running is quite an environmentally-friendly way to get around, but there are steps runners can take to be even more green. A few straightforward changes to training and racing routines can allow a runner to reduce his carbon footprint.

It’s easy to dismiss the impact one runner will have on the environment and decide to do nothing about it. Instead, try to think about the thousands of runners entering hundreds of events held in the UK every year. By sharing green tips with fellow runners, an eco-friendly athlete can start to make a real difference.

For a start, those who enter races the length and breadth of the country should think about how they get to and from events. Where possible, try to reduce fuel costs and carbon emissions by making use of public transport and leaving the car at home. When using a car is more practical, try to share transport with fellow runners.

If there is the option, enter races online. This can cut down on paper waste and help race organisers reduce their carbon footprint. Most of the time, it’s easier for the runner too.

While preparing for events, make training runs greener by choosing a reusable drinking bottle instead of disposable plastic ones. Those who run to a soundtrack should think about the energy used to recharge MP3 players. Don’t leave chargers on standby, as this will waste electricity and money. Instead, plug the MP3 player into a timed socket, so that there is enough power for the next training run but less waste.

Turn Down the Heat

Running kit has to be washed after every run and there is no getting around that fact. But many modern washing machines will allow clothes to be washed at 30 degrees, and this should be fine for all but the very dirtiest of running kits. Also, try to ensure the washing machine has a full load before running it.

When splashing out on new running kit, think about what you do with the old one. If it’s still in good condition it can be sold on or given to a charity shop. If it’s really worn out, take it to a textile bank, where tatty clothes are shredded and recycled as padding or cloths. This is a far better option than adding to the tonnes of textiles thrown into UK landfill sites every year.

Sadly, Britons throw millions of pairs of shoes away every year too, but it’s easy to recycle old trainers. Shoe banks can be found at many supermarkets throughout the country. Nearly-new running shoes can be sent to Africa to help up-and-coming athletes, while worn-out trainers can be reinvented as running tracks or tennis courts.