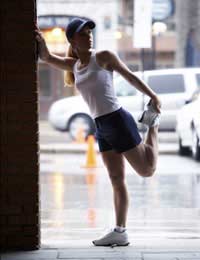 Not enough attention is paid to the psychological side of succeeding in sport. And by success that doesn't mean beating others in a competitive environment. The runner who sets themselves the goal of running three miles, three times a week and achieves it has, by definition, succeeded.

But to whatever level you are aspiring to reach, it is not just a case of training the muscles to get there; where the body goes, the mind must follow, otherwise the physical elements will quickly begin to unravel.

The ultimate psychological test of any runner is the marathon. Over the course of the 26 miles, it is not only the limbs that are going to be complaining of the stress put on them. The mind, too, has to wrestle with the magnitude of the task. For example, the halfway mark can bring positive thoughts that 13 miles have been covered, only another 13 to go.

On the other hand, the thought of having got so far and having to do it all over again can have a devastating effect. It's amazing how the mind can compartmentalise issues such as tiredness when it wants to, or release them to come flooding out, filling the head with negativity - suddenly it feels as if you are running in glue.

Not everyone is going to find themselves in the situation of the marathon runner. But whatever the size of their individual challenge, there are going to come moments of self-doubt: when running up that steep incline suddenly appears impossible; when the final half mile is just unthinkable.

In such a situation, many runners try to switch off, emptying their mind and concentrating only on the mechanics of stride pattern and arm synchronisation. The alternative is to confront the negativity and use the determination that got you into a pair of shoes in the first place to overcome the problem. There maybe only 10 minutes left of the run to go, and, yes, the easy option is to give up and stop the treadmill or sit down at the side of the road. But think how you will feel in 10 minutes' time. If only you hadn't stopped, you would have finished now. Once you have confronted these demons and given up, then the next run is going to be even more difficult simply because a precedent has been set whereby when the going gets tough, you just give up.

As you become fitter, there will be flashes of negativity either because you need a new challenge or you are not hitting your targets as quickly as you liked. The important thing is not to go backwards. Rather, remember how far you have come, what you have achieved. Do you really want to throw all of that away? If you are fed up of your running routine, change it. If your targets are not being met, perhaps you are being impatient or putting too much pressure on yourself to meet them. Relax. You didn't start running with the expectation of winning Olympic gold, so why start acting like a prima donna now?

Every time you beat the mental pain barrier, you come out the other side stronger and better equipped to handle it next time round. Not only is your running making you physically fitter, you are mentally tougher, too.